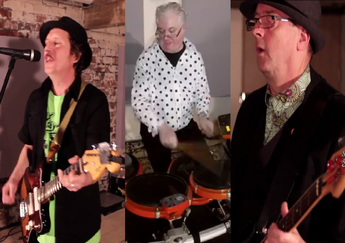 The Electric Luddites are a mature song-based rock band from Sheffield, South Yorkshire, UK.  The band specialise in original compositions with anti-establishment sentiments and left-leaning tendencies which they belt out with gusto together with a selection of thier own versions of unusual covers ranging from the Clash to Dylan.

With a current line-up of guitar, bass, drums and samples, the band create a unique wall of sound underpinned by their unrivalled pounding rhythm section that defies conversation and demands toe-tapping at the very least and aspires joyous cavorting to the converted.

All the band members are all long-serving musicians and songwriters with many hundreds of hours of public performances behind them and encompass individual backgrounds in an amazingly wide variety of genres from Folk and Country to Hard Rock and Indie with Classical and Punk thrown in for the hell of it.

The band also performs as The Acoustic Luddites with non-electric instruments adapting their music for folk and acoustic venues, open-mic nights etc.

You can buy The Electric Luddites music from CdBaby, preview the albums and tracks using the widget below
Here are the lastest videos of the band recorded 1 Feb 2016
Powered by